From October through first week of January I had been on a roll baking and cooking. I am a fan of cooking shows and love finding recipes on Pinterest.

This Fall/Winter I decided to bake new recipes that were based on the holiday or religious observance.

Here are my creations:

For Dia de los Muertos.  A holiday I’ve never celebrated because I had the wrong education on what the day is about.  I had thought it was about laying out food for past loved ones in your home in an altar format so that their souls could come to it and grab a bite to eat.  Food they were fond of.  This would throw me off because the Church never spoke of souls returning from heaven or anywhere else after death.

However, this is not the tradition.  Tradition is that your deceased loved ones are remembered on All Souls Day by creating an altar with pictures, flowers, and their favorite foods. The favorite foods are eaten by family or friends who knew them. This I had done for years not knowing I was somewhat participating in Dia de Los Muertos. My Dad passed away in 2006, and so on his anniversary I would eat a pastry or have a root beer float.

For this time around, I was excited to observe it and went all out.  I not only made an altar, but also made this delicious bread called ‘Pan de muerto’. It’s a fragrant, tasty bread.  Main flavors are orange, anise, and much butter. It made our home smell so good. The recipe too was enough to feed about 18-20 people.  I think next year I’ll make it in smaller loaves.

Here are some pics of the altar and bread. 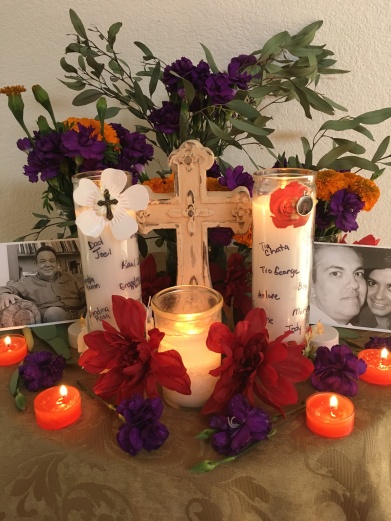 I have to mention as I was building this altar, a flood of memories hit me and the tears flowed.  I appreciate this tradition and do plan on doing one each year.

This past Christmas, my family and I made Tamales. The first time where my family of women gathered in our home to make red chile tamales.  Mom, my sister, niece and I spent a Saturday making almost 18 dozen tamales.  We didn’t just make them, we shared laughter, conversation, and created memories.  My hope is that we will do this every year.  The recipe for these tamales was a bit trial and error, but most of the direction came from my Mom, especially her recipe for red chile.  The flavor is deep.  It can work for several recipes like chili con carne (chuck roast cooked for hours with a red chile sauce).

For the Epiphany, which is celebrated on January 6, commemorates the Feast of the Three Kings.  The Kings presented the gifts of gold (kingship), frankincense (deity), and myrrh (death) to Jesus at his birth.

Many cultures throughout the world use this Feast to celebrate in what I found in common ways. Most traditional is baking a bread that includes a plastic baby symbolizing Jesus.  If you Google it, you’ll find a slew of recipes from all over the world.

I chose to do this recipe: Rosca de Reyes (King’s cake)

The cake to me seemed similar to the Pan de Muerto I made for Dia de los Muertos, minus anise.  However, I felt like I could decorate this bread more with my own taste.  You can design it how you want.  I went by a few pictures on Pinterest. 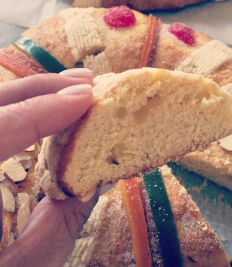 I enjoyed the reflection while baking. And including my family to enjoy a bite and too think more about the feast being celebrated.

calidrab.wordpress.com/
One Mountain at a Time

a blog of hope by savannah wall