I learned about this book by mention on the Jennifer Fulweiler’s show.   It caught my attention because it had to do with addiction and recovery.

Once I started reading it, I was hooked.  It’s a raw memoir from John Carmichael. He recounts his life from childhood through finding his way out of addiction by becoming a Catholic.  It struck a chord with me because I too came from an upbringing of alcoholism. 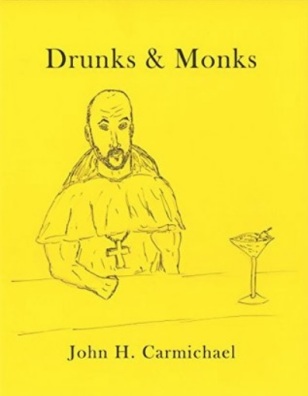 In his book, he speaks about his rise to a successful career, finding his wife, until he becomes an addict and destroys all around him. His Mom was a hard core alcoholic.  Morning, day, night. Even though he saw the reckoning, he could not find himself out of it.  Much of the effects of what would cause him to drink, did come from his relationship with his Mom and love not received by either of his parents.

He describes his environment in sunny So Cal – Orange county. The pull of the riches and struggle with letting go. I pictured well where his life took place because I’m so familiar with this area since I have visited these neck of the woods since I was a child.

One spot in particular is San Juan Capistrano Mission where he first begins his attempt in finding God. First taking back by the beauty of the Chapel where Mass is recited in Latin. Then his courage to reaching out to a monastic priest who then becomes his confessor.  And even though he made these strides he shares his very real battle working out his faith through temptation and relapse. What I appreciated is how the San Juan Capistrano community, supported him and invited him to the faith. An example for all parishes to follow.  He felt so welcomed, he even became a part of the choir.

Even though most understand, that even when one follows the Catholic Church punch card, it doesn’t mean that all will be easy going. In Carmichael’s case, the timing of his initial prep in the faith became his strength when his Mom’s struggle with alcoholism became its worst and then her diagnosis of terminal cancer.

His style of writing was as if you were experiencing it yourself.  Truly can understand his battles and his journey through faith.

calidrab.wordpress.com/
One Mountain at a Time

One foot in front of the other. We'll get through this together.